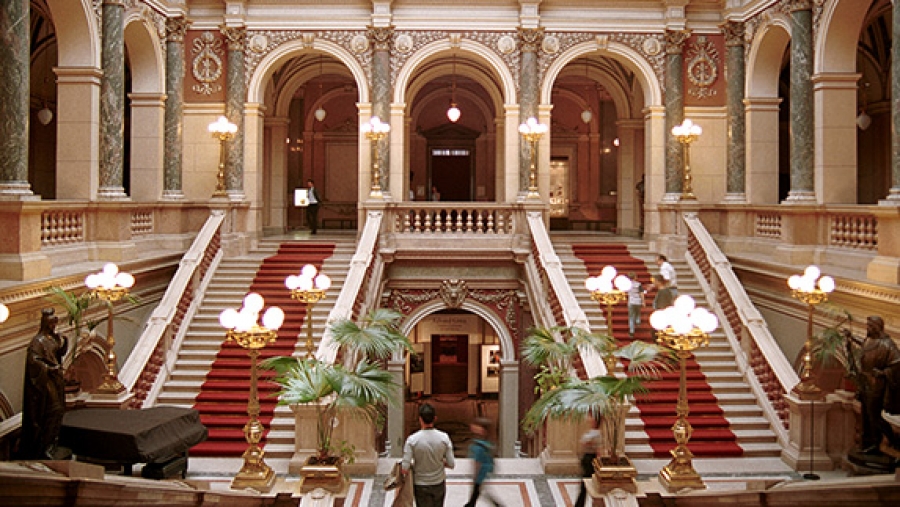 The National Museum was founded in 1818 as Vaterländisches (patriotic) Museum and was rebuilt due to the demolitions that were connected with war and occupation moments in our history ( mainly in 1945 and 1968), and was also renamed several times.

The Neorennaisance building was created by Josef Schulz, then decorated by the National Theatre Generation – it means the sculptors as Bohuslav Schnirch, Antonín Wagner and Antonín Popp, and the painters – Vojtěch Hynais and Václav Brožík, who were creating it between 1885 and 1895. The reconstructions are still lasting and are to be finished in 2017. For the time being, the main building on Wenceslaus Square is closed and the collections of Historic Museum have been moved to Terezin Memorial Museum.

Due to the reconstruction of the historical building of the NM, there are currently no exhibitions in Natural History Museum. However, visitors will be able to view the expositions named Noah´s Ark in a new building (Vinohradská 1, Prague 110 00) soon.

As for Historical Museum, we can see the following long-term exhibitions – Czech Puppets and Circus Exhibition (Big Square 43, 383 01 Prachatice) , Czech Folk Culture, Society in 19th century in Bohemia – this exposition is to make us thinking about the lifes of our ancestors, about their habits and traditions and the influences that formed it all.

Czech Bell Founding exhibition in Janovice shows us the production of bells in Czech and Moravia from Middle Ages to 19th century. There are also the following ones - František Palacký and František Ladislav Rieger Memorial (Palackého 7, Prague 110 00), the house and flat where these personalities lived and worked, Lapidary (Výstaviště 422, 170 00 Prague 7), Laboratory of Power – Mausoleum that were built to exhibit a body of a communistic president Klement Gottwald after his death in 1953, and Crossroad of Czech and Czechoslovak Statehood (Vítkov Memorial, Prague 3).

In National Museum Library, we can see three long - term exhibitions – Memorial of Jiří Melantrich of Aventin (289 34 Rožďalovice, 146) , Rilke, Kraus and Vrchotovy Janovice (257 53, V. Janovice castle), which acquaints us with the then intelectual society, as the second one, and the History of the Book and Letterpress from their Beginnings to the Present in the same place(currently closed). As for Melantrich Memorial, there are two parts of exposition – the first one acquaints us with his life and work, the second one consist (for example) of many Renaissance prints he published.

In Náprstek Museum (Bethelheim Square 1, Prague 110 00) , foreign culture lovers will be impressed by the exhibitions about Australia and Oceania, or Nias - the Island of Ancestors and Myths. We should not forget to mention the exhibition that gives us insight into Vojtech Naprstek life and work.

Czech Museum of Music (Karmelitská 2/4, Prague 118 00) holds many sites in its trust, not just located in Prague – such as Bedřich Smetana Memorial in Jabkenice, Antonín Dvořák Memorial in Nelahozeves (277 51 Nelahozeves 12) or Josef Suk Memorial in Křečovice at Sedlčany (257 56 Křečovice u Sedlčan 3). In Prague, we can visit Jaroslav Ježek Memorial – The Blue Room (Kaprova 10, Prague 110 00) , the Journeys of Bedřich Smetana (Novotného lávka 1, 110 00 Prague) and Antonín Dvořák (Ke Karlovu 20, 120 00 Prague 2) and the exhibition named Man, Instrument and Music. All these exhibitions tell us further details about the lifes of the personalities we have mentioned. Man, Instrument and Music exposition acquaints us with the development of instruments´ production, sheet transcript etc.

The opening  times of individual sites can be found here (to see the one of your choice, just click on the link below) : http://www.nm.cz/index.php?xSET=lang&xLANG=2