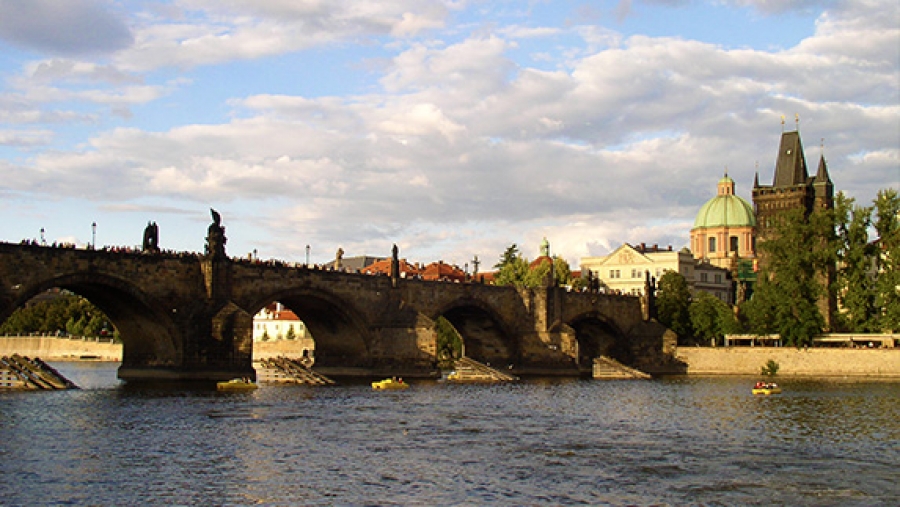 Everybody’s favourite Prague activity is to stroll down the Charles Bridge. It is a bridge in the city of Prague that connects the Old Town with the Lesser Town. For centuries, the bridge had been the only link between the two places. In its early beginnings the bridge was called as the Stone Bridge as it is a stone gothic bridge.

But later it was renamed as Charles Bridge. Today the bridge is an ideal place for an amazing view of the Prague city. It will appeal to photography and bridge enthusiasts from all over the world. The baroque statue of the saints embellishing the bridge gives it an even more exceptional view. These baroque statues were placed during the 17th century. Out of the many statues the most famous is the statue of St. John, a martyr saint of Czech Republic.

Earlier, a bridge named Judith Bridge was built in 1172 used to stand at this place. The Judith Bridge was the first ever bridge to be built over the river. Unfortunately, the Judith Bridge collapsed in 1342 when it was hit by a flood. Therefore in order to connect the two parts of the city, a stronger bridge was required, a structure which can withstand the harsh floods. The monument was built during Charles’ Reign. Its construction began in 1357 and was commissioned by the holy Roman Emperor Charles IV and the Czech king. It is believed that the construction of the bridge was strengthened by mixing egg yolk into the mortar. The Charles’ bridge is really strong; it has withstood many floods including the worst floods in the country. The bridge although now has been made pedestrian only but earlier it was used for wheeled traffic and it withstood the weight of that heavy traffic, incurring only minor damages to its structure.

The Charles Bridge tops the lists of places to be visited by tourists and locals alike in Prague. The most impressive view of the Charles Bridge can be experienced at dawn because by 9 am the bridge is jam packed with tourists and you will hardly find place to walk even. If you take a boat trip with Prague Venice then you can see the historical and only surviving arch of the old Judith Bridge. The bridge is an ideal place for movie shootings and is very popular among Czech musicians and artists. There stands a line of these artists and musicians and souvenir vendors along the both sides of the bridge. During the boat trip, make sure you don’t miss out on witnessing the great view of the bridge towers that stand on each end of the bridge. The grand vistas which go up and down the river have an exquisite look as well.  If you want to have a perspective of the bridge from above, climbing up these towers would be a really amazing experience for you. Also, do not miss to touch that baroque statue of St. John of Nepomuk which is believed to bring luck.