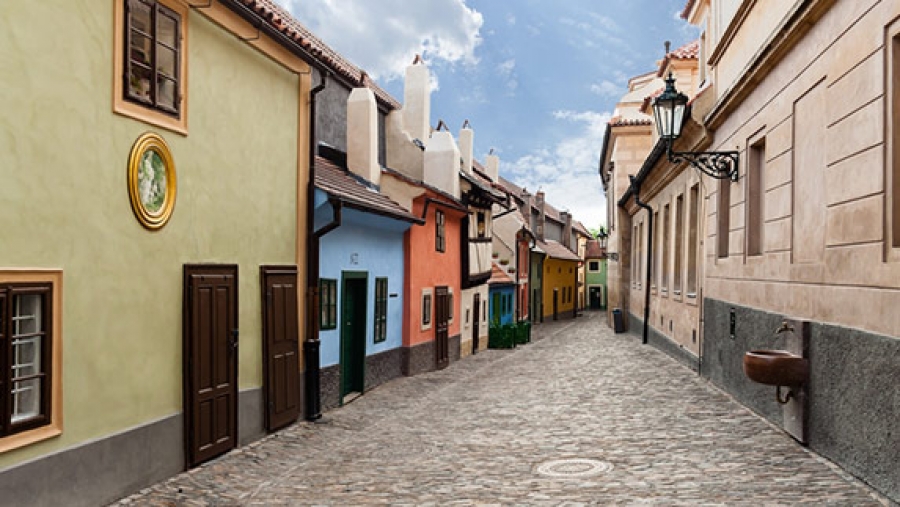 Prague is a beautiful city famous for its history and architecture. The historical buildings attract tourists from all over the world to come and visit Prague. The emotions of many Czech citizens are associated with the famous Prague Castle.

Along with the great wall of the Prague Castle there is a small ancient street called the Golden Lane. Golden Lane is the smallest street of Prague.

The goldsmiths in Golden Lane

Golden Lane was built during the 15th century. Some people claim that archery lane was the name of that street at that time. The history of the Golden Lane is reflected by the special atmosphere of this street. Along with this street is a line of adorable small houses that look more like the doll houses. One of the architectural attribute of these houses is that they are made up of stone, wood and mud. It is important to note that common people themselves built these houses. No architect was hired for building these houses. These colourful houses date back to the 16th century and were constructed for the Castle guards. This street was occupied by the goldsmiths too. These goldsmiths lived in these houses with their families for centuries and it was due to them that the street was named as the Golden Lane.

Along with the Castle guards and goldsmiths some important Czech personalities lived in these houses including a renowned Czech writer Franz Kafka who during the First World War lived and wrote his literature in one of these houses. These houses were occupied by common people too and they lived there till late 1950s. It is difficult to imagine how people lived in such small houses of the golden lane.

These houses are utilised for different purposes some have games for the visitors to enjoy there are crossbows that you can try. This street has shops of local crafted jewellery and other things so if you want to bring something from Prague for your family or friends then you can easily find great local crafted stuff on the shops of this golden lane. Also you don’t have to buy any extra ticket to visit this golden lane. The entry to Golden Lane is included in your Prague Castle ticket.

Undoubtedly the most adorable place to visit in Prague is the Golden lane. The Golden Lane should be on your must to visit list when you are planning to visit Prague. This Golden lane is a great attraction especially for kids. They love to see all those beautiful adorable and colourful small houses. They usually have the feeling of being in a Barbie house. Also the delicious food in the shops of golden lane is something everyone loves. Visitors who get tired after visiting the castle come to Golden Lane to enjoy the yummy food. Also if you want to see the exact 16th century house of that street then house number 20 on Golden Lane is the one which is not changed at all. It has the exact look that it had when it was built. Once you are in this street you will want to live aside the Castle in this Golden Lane.