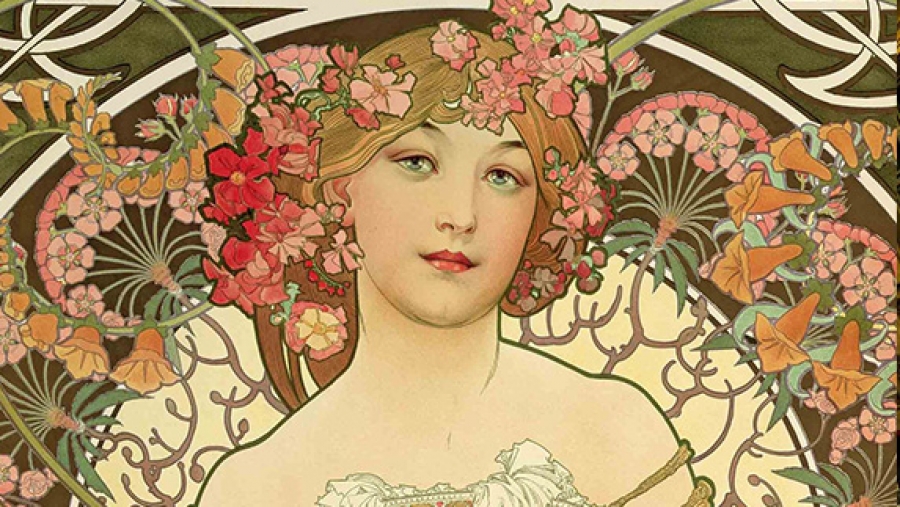 This museum is the first one in the world that is dedicated to life and work of Alfons Mucha, a very famous art – noveau artist (1860 – 1939). It is located in the historic center of Prague, in Kaunic Palace that is built in a Baroque style.

To know who is the museum dedicated to, let say something about the artist at first: Alfons Maria Mucha was born in South Moravian region in 1860. At the age of 19, he started working as a theatre decorations painter in Vienna. Although he performed more as a singer during his grammar school studies a lot and unsuccessfully applied to the Academy of Art in Brno, by working for theatrical design company he was able to improve his skills. A few years later, he studied at Akademie der Bildenden Künste München and Académie Julian in Paris. In 1894, he was asked to draw a poster for Sarah Bernhardt, one of the most famous actress performing in Paris. It was an overnight sensation and announced the new artistic style and its creator to the citizens of Paris. Bernhardt was so satisfied with the success of that first poster that she entered into a 6 years contract with Mucha. This time, the end of the 19th and the beginning of the 20th century, is considered as the top of his career by right. When the Czechoslovak Republic was established, Mucha also designed the new postage stamps, banknotes, and many else government documents .

The exposition gives us an overview of Mucha´s work, except for the Slav Epic (a series of twenty paintings showing the history of the Czech and the Slavic peoples) that is organised in the National Gallery in Prague. Full attention is paid to the time Mucha spent and worked in Paris – it means from 1887 to 1904. Among all the posters, there is the most famous one of lady Sarah Bernhardt, and also an example of Documents décorafits, sketchbook from Paris. The individual section is created by the posters that were drawn in Bohemia between 1910 and 1939 (Mucha died early after Gestapo interrogation at the beginning of the second world war), and are considered as his characteristic oil painting. The visitors can also meet a little demonstration of Mucha´s life, as there is an oportunity to see the atelier furnished by original pieces, photographies of him and his family or the pictures he took in Paris. We can also watch a short 30 minutes long dokument about the artist´s life and work.

The museum is located in Kaunic palace in Panska street 7, Prague 110 00.