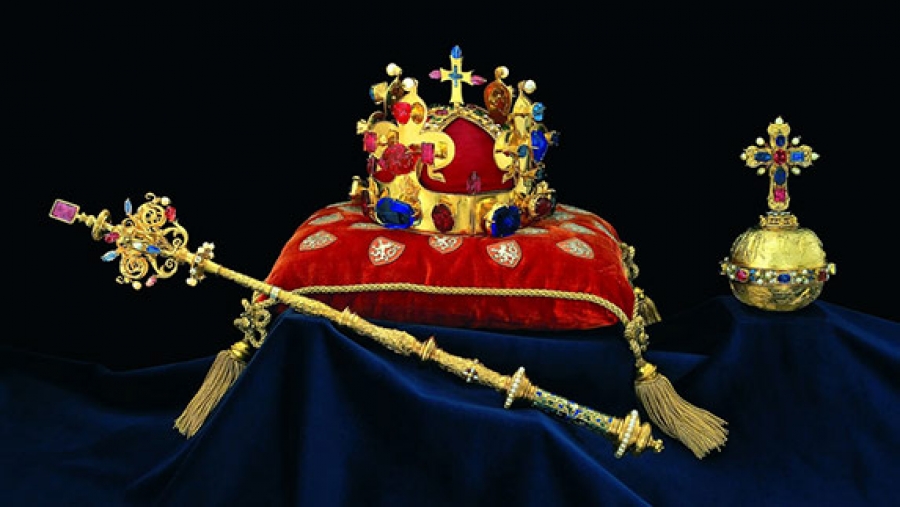 Therefore nobody can access these jewels until all the important seven key holders convene and facilitate the opening of the safe door. Following are the Bohemian Crown Jewels:

The Crown of Saint Wenceslas

The oldest and the most important jewel of the Bohemian Crown Jewels is the Crown of the Saint Wenceslas. This crown was made for the coronation of Charles IV in 1346. The crown is made up of extremely pure 22 carat gold including even its clips that are used to keep the crown together. The crown has four sections and there are four big lilies each present at the top of one section. Two cross bands at the top join all the four sections and there is a little cross in the centre. Valuable stones and pearls give that precious look to the crown. The precious stones include 18 sapphires, 1 aquamarine, 31 spinels, 15 rubies, 1 rubellite, 25 emeralds and 20 pearls. To prove the Latin inscription a thorn from the crown of Jesus Christ is inserted inside the cross. It is interesting to note that the weight of this 19 centimetre high crown is 2358.04 grams. Also the height and the diameter of the crown are same.

Some people claim them to be very old but the research proves that they are only a hundred year old. These youngest Bohemian jewels consist of the coronation cloak having a sweep and ermine, a belt, a stole and a maniple. They are made of the fabric brocade which was produced in 17th century in Italy. But all these Coronation vestments reflect the exact coronation vestments used by the kings earlier. Although these coronation vestments have lost their artistic and historical importance but still they are an important part of the Bohemian Crown Jewels.

The Royal orb is a masterpiece made up of pure 18 carat gold. This Royal orb is 22 centimetres long having a weight of almost 780 grams. Precious stones including 6 spinels, 8 sapphires and 31 pearls were used for the decoration of this orb. This Royal orb is a lovely example of Renaissance jewellery. Some words in Latin are engraved on this orb. Six tiny sphinxes can be noticed at the base of the cross sitting sphere.

Just like the Royal orb the Royal sceptre is also made up of pure 18 carat gold. This 67 centimetres long royal sceptre weights 1013 grams. It is decorated with 4 sapphires, 5 spinels and 62 pearls. Also the lovely engravings make this Royal sceptre admirable.

Another 18 carat pure gold jewel is the Royal apple having a diameter of 11.9 centimetres and a height of 9.8 centimetres. It has a cross on its top which is 22 centimetres high and weights 780 grams. This coronation accessory is beautifully decorated with precious stones and pearls including 8 sapphires, 6 spinels and 31 pearls. Wrought reliefs complete the beautiful image of this Royal apple.