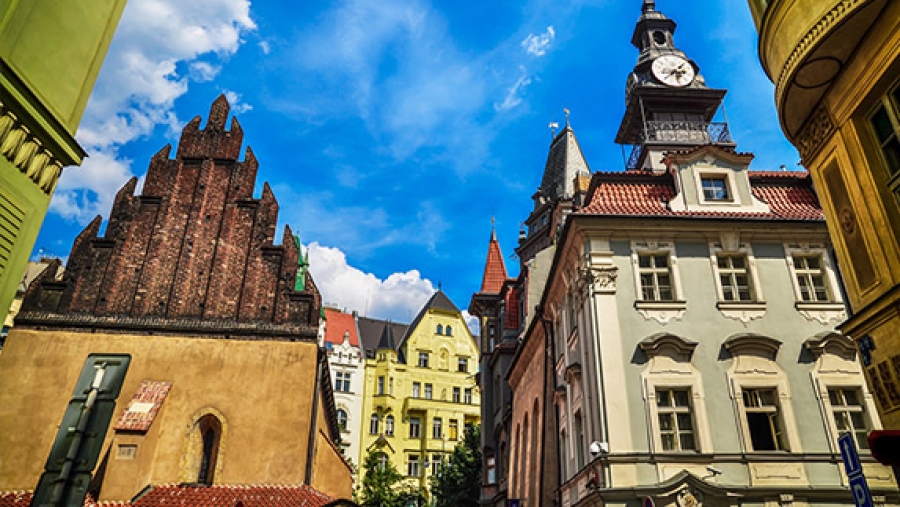 The museum was founded in 1906, which fact classes it into the eldest  European Jewish museums, and was established under the patronage of a native of Prague, historian Salomon Hugo Lieben, and a member of Czech Jewish Movement, August Stein.

It comprised many archival prayer collections. When the second world war started, these collections passed to Jewish Comunity Prague possession till 1942, when the Central Jewish Museum was re-founded and the chattel was increased with the property of deported Jewish families. During the communistic  era, the museum could not be managed independently and its activities were censored very strictly due to the then ideology. The museum was restituted to the Jewish Comunity. Since 1.10.1994, the museum has run as a non-state institution.

Nowadays, the main building of museum works as an educational facility and arranges the very well known meetings with Shoah survivors, guided tours or Sunday children´s workshops that take place once a month in Prague or Brno and are to acquaint the Jewish culture the playful way.

Maisel Synagogue (Maiselova Street 10, Prague)  was founded by the Old Jewish Town Primate Mordechaj Maisel in 1590 – 1590, during the rule of Rudolf II. Emperor, built in Renaissance style by Juda Coref Herz and Josef Wahl. After the big fire of Jewish ghetto in 1689, the synagogue was rebuilded many times and gained today´s neo – gothic appearance in 1893 – 1905.
Currently (up to February 2015)  it´s closed. However, the visitors will be able to see 2D projection of the Old Jewish Town, as well as the old Hebraic manuscripts or database of the famous Jews.
The synagogue is also meant to become a place of small theatre and music evening performances.

Pinkas Synagogue (Široká Street 3, Prague) is the second eldest extant synagogue in Prague.  It was built in 1535, named after the grandson of a building instigator Aron Horowitz, Pinkas. During 1955 – 1960, the synagogue that was originally built as a family prayer room,  was changed to a monument of the Czech and Moravian victims of Shoah.  It was renewed in 1995, after the end of communism.
There is a permanent exposition of the Children´s drawings from Terezin Ghetto.

Klausen Synagogue (U Starého hřbitova 3a, Prague), the biggest one, was built in 1694. After the fire in 1689, three original buildings – klauses – were connected into the only one and rebuilt to early gothic style. It was the second main synagogue of Jewish Community. There is a permanent exposition of Jewish traditions that shows us the Jewish prayer, family and household customs.

Spanish Synagogue (Vězeňská 1, Prague) is the youngest one and was built in 1868. It was named after the inside decoration that was inspired by Spanish Alhambra.  From 1836 to 1845 František Škroup, the composer of Czech national anthem, worked there as an organist.
There is a permanent exposition of Bohemian and Moravian Jewish History during 19th and 20th century, icluding the special exhibition of Shoah and Terezin Ghetto.
The regular prayers and Jewish celebrations take place here.

Old Jewish Cemetery (Široká 3, Prague) belongs to the eldest Jewish  burial grounds in the world and to the most significant monuments of the Old Jewish Town. It was founded in the first half of the 15th century (as we can pass a judgement on the oldest grovestone from 1439). Although the area was widened many times, the space was not sufficient and  it was usual that with time going, there were created new lawyers of buried bodies. The symbolism of natural attributes , usually connected with the character of the buried person, is characteristic.  Among the important ones buried here, we should mention a scholar Rabi Low, a poet Avigdor Kara or Mordechaj Maisel at least.

Robert Guttmann Gallery ( Široká 3, U Staré školy 3, Prague), named after a Czech painter Robert Guttman (1880 – 1942), was opened in 2001. There is an important exhibition of today´s  Jewish  visual art influence, as well as many presentations  focused on Jewish monuments of Bohemia and Moravia, Jewish persecution during the II.world war or the typical moments and events of their everyday life.