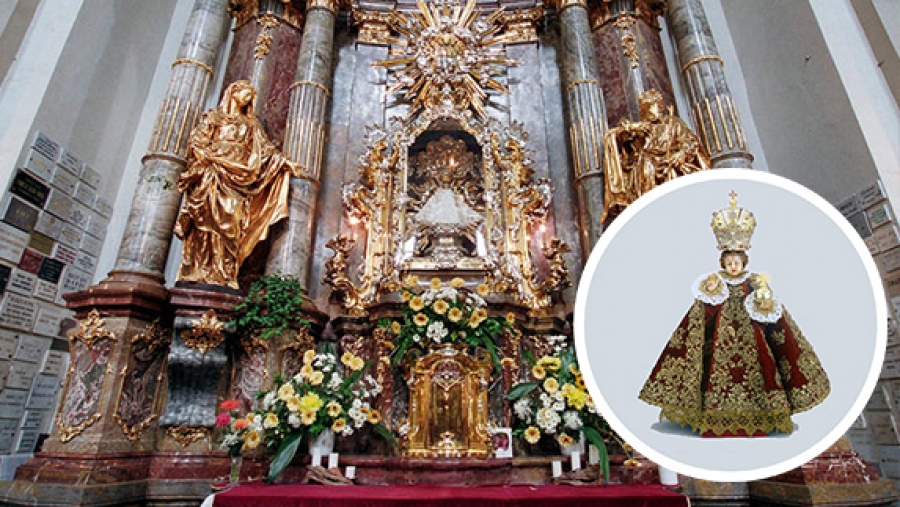 The history of the miraculous Infant Jesus of Prague is more than 400 years old. Maria Manriquez from her native country Spain brought the precious souvenir of this statue of the holy infant in the guise of a king. The eighteen inches tall wooden statue is covered with a wax-coat.

The statue also signifies the world-wide kingship of the Christ child as the infant has a cross and is holding a miniature globe in its left hand and the right hand extends for blessing. The infant also indicates the two natures of Christ by raising the first two fingers. Maria in 1556 was married to a Czech nobleman and gave birth to a daughter and the statue was later given to Maria’s daughter. Maria’s daughter Polyxena later at a church gifted the statue to Carmelites. There in the church the statue was named as the Infant Jesus of Prague.

There started a war then and everyone had to evacuate the church and the statue was lost. When the war was over, people started returning to Prague. By then nobody knew where the statue of the Holy Infant was. No one had any idea that the statue could be buried in the ruins of the Lady of Victory church. The holy statue was later found in 1638 by a young priest. Currently, the statue is placed in Lesser Town in Prague and hundreds of people come daily to see this miraculous statue.

During the year the gowns of the Infant Jesus are changed many times according to the occasions or the time of the year. Gowns of different colours are used to represent different occasions like Easter, Christmas and White Sunday etc.

Famous as pilgrimage site in Prague

People from far places come to Prague to bow down before the miraculous statue. It is believed that your problems can be solved just by looking at the statue. Also the view gives an inner peace. The statue holds the faith of millions of people across the world.
When you go to Prague and start wandering around, do not miss to visit the miraculous statue. The view will definitely give you inner peace and satisfaction. Also some miracle may also happen to you. So do not forget to see that little beautiful statue of such great importance. Do not go for the small size of the statue! It really can do miracles.