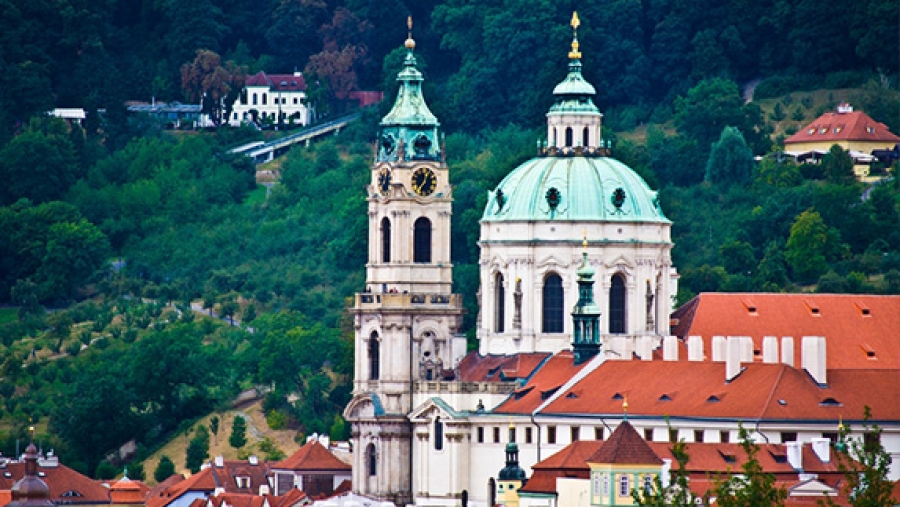 The Church of St Nicholas - Fotolia.com

The Church of St Nicholas

Today, Prague is uniquely known for its preserved historical sites. The Church of St Nicholas is one of the most famous churches in Prague. Displaying the façade of one of the most valuable baroque building, the church of St Nicholas is the second finest architectural structure of Prague. The visitors are astonished by the monumental interior and the size of the building of the church.

The church building is located at the exact centre of the Lesser Town. It lies right next to the former Jesuit college. Prague bishop Tobias consecrated it in 1283 as a Gothic parish church and the original structure persisted to exist till 1743, and was maintained without any major changes. In 1687 Jesuit college was built and it provided an ideal base for the two towers for the future structure of the church. To build the church, certain buildings were demolished including 12 houses, an old school and the important Rotunda of St Wenceslas. The adjacent cemeteries had to be closed down too.

The construction of the church of St Nicholas kept going on for approximately hundred years rendering one of the most valued and appreciated baroque building in the present times. The architectural gem is the result of continuous efforts of three generations of great baroque architects.

The overall design was changed after 1702. The new design contained a central dome above the transept with an intricate system of interconnected cylinders. From 1704 to 1711the dynamic effect of church was maximised by building massive naves and undulating vault with a system of intersecting ellipsoids. Between the wide spans of the arcade, pillars were built, supporting the “triforium”. In 1737 the construction of the chancel and its characteristic copper cupola began which ended in 1752.  Although the construction of the church was finished by then but the ornamentation work took twenty more years to finish. In 1775 the church of St Nicholas became the main parish church.

The architecture of the church is quite impressive with a 20m dome diameter. The church is the tallest building in Prague center with a height of 49m. The church’s massive dome directly connects with the adjacent slender belfry.

The church’s facade is intensified by alternating waves of concave and convex forms. A St Nicholas statue is placed in the central elevated part. The purest example of the Roman baroque in Prague is the actual facade of the church which is decorated with crest. A trio of grand entrances is lead by semi-circular staircases. There is a striking contrast of colour between the bright lantern light and dark dome. Along with the gold-plated copper statue of St Nicholas, the church also has statues of other saints that stand below the cupola including the statues of Our Lady of Foy and graceful Mother of Mercy. A painting of open heavens covers the dome. Other paintings cover the sides beneath the chapel. There is also a series of ten outstanding paintings which earlier were installed in the Jesuit college. From 1745-1747 the main organ was built which is almost six meters long and has around 4000 pipes.

There could be no better example of high Baroque architecture than the church of St Nicholas. It is the most distinctive and prominent landmark in the Lesser Town and this architectural gem completes the panoramic view of the city.