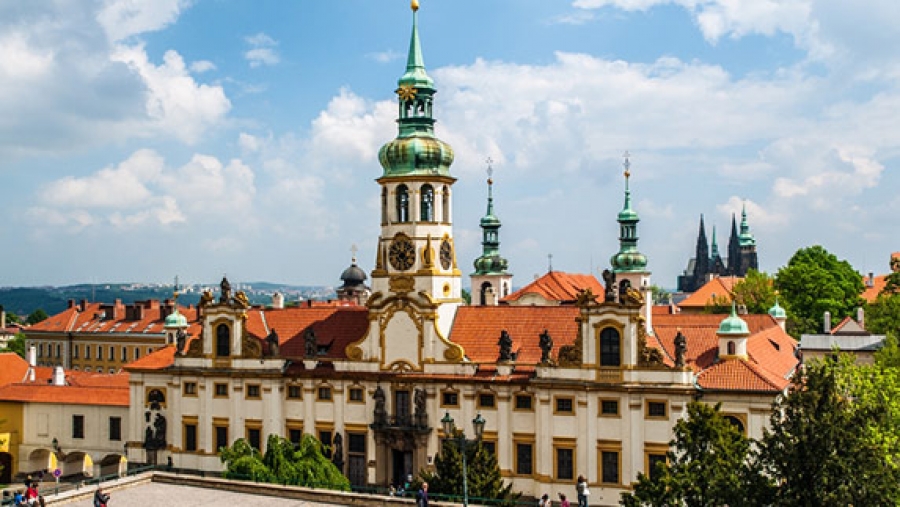 In Bohemia the main Marian pilgrimage destination is Loreto - a sacred shrine standing in Prague. Loreto has a captivating history and is one of the most remarkable baroque historic monuments. The church is famous for its numerous gems including the Carillon and Santa Casa.

The church is a result of different construction phases. Many prominent and remarkable architects of Prague participated in designing and building the church. This priceless sacred art treasure is the result of unlimited efforts of the Bohemian architects.
After the Battle of White Mountain was over the Catholics took over Prague so they started searching for a place to build church. There were houses that were left abandoned because of the war and along with these houses there was a Holy Stable-the place which is considered as the home of Saint Mary. Therefore in 1626 the construction of Loreto started in Prague to represent the legendary stable. Loreto is stuffed with all the remarkable gems that can capture the interest of any visitor. Each and everything in Loreto convinces the visitors a lot.

When you are on your way to Prague castle you can notice the clock tower of Loreto and its expensive decorated frontal facade from a great distance. Also near Loreto you can also hear the bells of the famous Carillon every hour.  If you want to see the entire Loreto as scenery then just go to the terrace of Cernin Palace and watch that beautiful historic picture. If you keep descending and pass the Loreto gate you will be surprised to see the disposition of the place of pilgrimage.

When you visit Loreto something will encourage you to pray every hour and that’s a set of no more than 30 bells called the Carillon. Eberhard von Glauchau a rich merchant from the Lesser Town gave this carillon to Loreto in 17th century since then it is placed and operated there. This Carillon was consecrated in Loreto’s clock tower in 1695. Later the Carillon was attached to the clock mechanism of the tower. The core purpose of the carillon was to gather the pilgrims beside Santa Casa.

The cloister with corner chapels

It is the place in Loreto where famous Loreto treasure is exhibited. The most valuable gems are exhibited in this New Treasury which is on the first floor of Loreto. You will be amazed by the beauty and attraction of these valuable historic treasures.