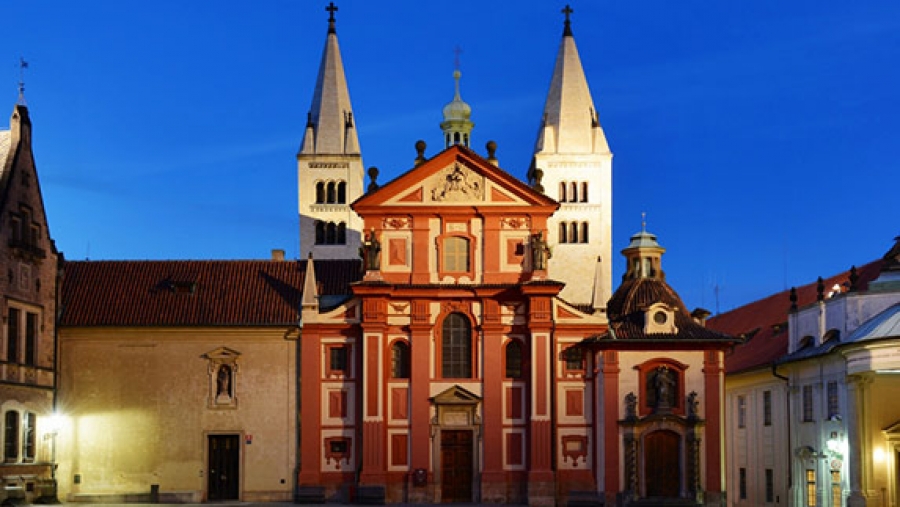 Within Prague Castle the best-preserved Romanesque church is the St. George’s Basilica.  This church is the second oldest church in Prague. No other Romanesque building in the entire Prague is as important as this church.

In 920 this church was founded for being the main Bohemian sanctuary but the space seemed small and there came a time when the church became very congested therefore in 973 with the construction of St. George’s Benedictine Convent the church was enlarged too.

Since its formation St. Georg’s Basilica was a place where rulers were being buried. The last ruler was buried in 1055 after which burying was banned inside the church. You can find the graves of several rulers inside the St. George’s Basilica including the grave of first Czech Christian martyr St. Ludmila. There was a huge fire in the early 12th century so the entire church was rebuilt. During the 17th century Baroque facade was added to the church.

Just few steps behind the St. Vitus Cathedral you will find the astonishing St. George’s Basilica. Over the years there have been some architectural changes but most of the exterior is same as it was centuries ago. The most interesting feature of the church is its different architectural styles. It has a touch of Romanesque, Baroque and Gothic art. If you look up at the efforts of the architects who designed the church you will definitely appreciate it even more. The place will not eat up much of your time; you can visit the entire church within 15 minutes only.

The most amazing thing about the church is its two white towers. These towers were added during the 12th century when the church was rebuilt. These towers give an incredible look to the church. Each tower represents the female and male and is built accordingly. One tower is named Eve it is narrow and represents delicacy while the other tower is named Adam and is bigger and stronger. The Beautiful Eve tower is at the northern side of the church while the powerful muscular tower Adam is at the southern side of the church.

St. George’s Basilica is a church with finest modern concrete covering up all the original features. What makes the church remarkable is the use of concrete slabs for floor rather than glass. This old church is worth watching with majesty of its own. You will be amazed to see the altar paining and frescos in the dome of the church.