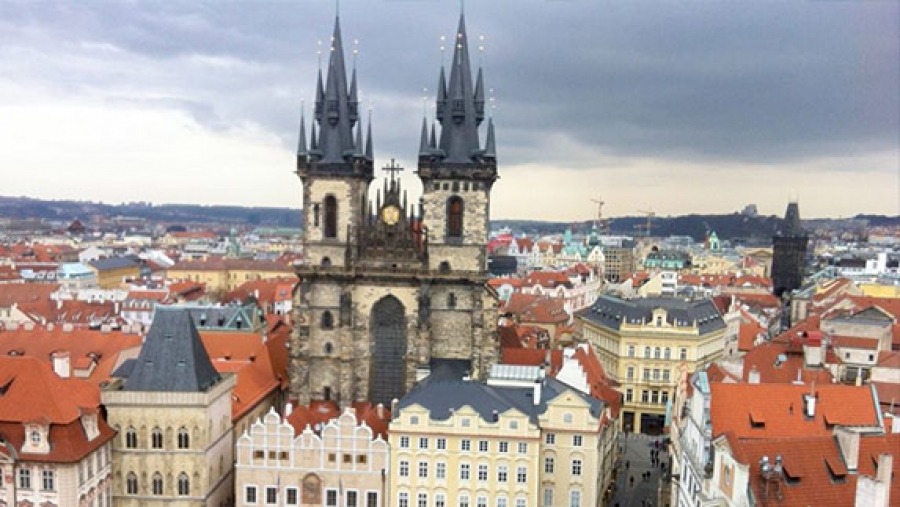 Church of Our Lady before Týn

Church of Our Lady before Týn

The side of Old Town Square in Prague is dominated by the Church of Our Lady before Týn. The name of the church was originated from the name of one of the courtyard behind the church the Týn courtyard. This church is one of the most prominent and imposing Gothic art building in Prague.

The history of this church is amazing and long. Earlier in 11th century there was a Romanesque church. Merchants coming from far away to the Týn courtyard use to spend time in this church.
This truly remarkable Gothic art building was built in 1385 by the Catholic Jesuits replacing the small Gothic church. At that time Prague was under the rule of Roman catholics who were slaughtering the Hussites. It was the main church of the catholic Jesuits but it was later occupied by Hussites. The Hussites then made few changes in the church that can still be seen. The Hussites added the towers, the gable and the roof later in 15th century. This church is one of the most important historic monuments of Prague.

The two towers: man and woman

The overall architecture of the church is amazing it has 80m high towers which are topped by four small spires. The church also possesses a twin tower which everyone thinks are identical and that’s why they are called the twin towers but they are not identical at all. It is said that one tower represents the male and the other represents female therefore they have likewise difference. As women are delicate and men are strong that’s why one tower is more solid and the other one has delicacy. Although the external architecture of the church represents the Gothic art but the interior has all the beautiful Baroque architecture.

There is a golden statue of the Virgin Mary which is beautifully decorated and can grab the attention of any visitor. The famous Bohemian architect Petr Parler made a significant contribution in building the church a wonderful Gothic sculpture from his workshop is placed in the northern portal of the church. A narrow passage between houses in front of the church leads towards the western face of the church this is where the main entrance of the church is located. There are ancient paintings that are displayed inside the church including Karel Skreta’s paintings the early Baroque altarpieces. The church is also famous for having the Prague’s oldest pipe organ. Heinrich Mundt in 1673 build that organ. This organ is the most remarkable organ of the 17th century. It is believed that there was no better organ in the entire Europe at that time.

During your visit to this beautiful city do not miss to see the magnificent crucifixion and scenes of the passion of Christ represented by the beautiful decorations bas-relief of the Church of Our Lady before Týn. Take a look around the church and experience yourself standing in 15th century. If you want to see something which you never want to forget then visit the church at night when it is lit. This unmistakable Old Town landmark can take you centuries back. People believe that fairies loom over the church at night and spread their magic pixy dust but only the eye of a faithful person can see that scene.
Although you can see the entire building of the church from a distance as the building of the Týn School hides the church’s significant part but still you can see it from closer and can’t stop yourself from admiring its beauty.